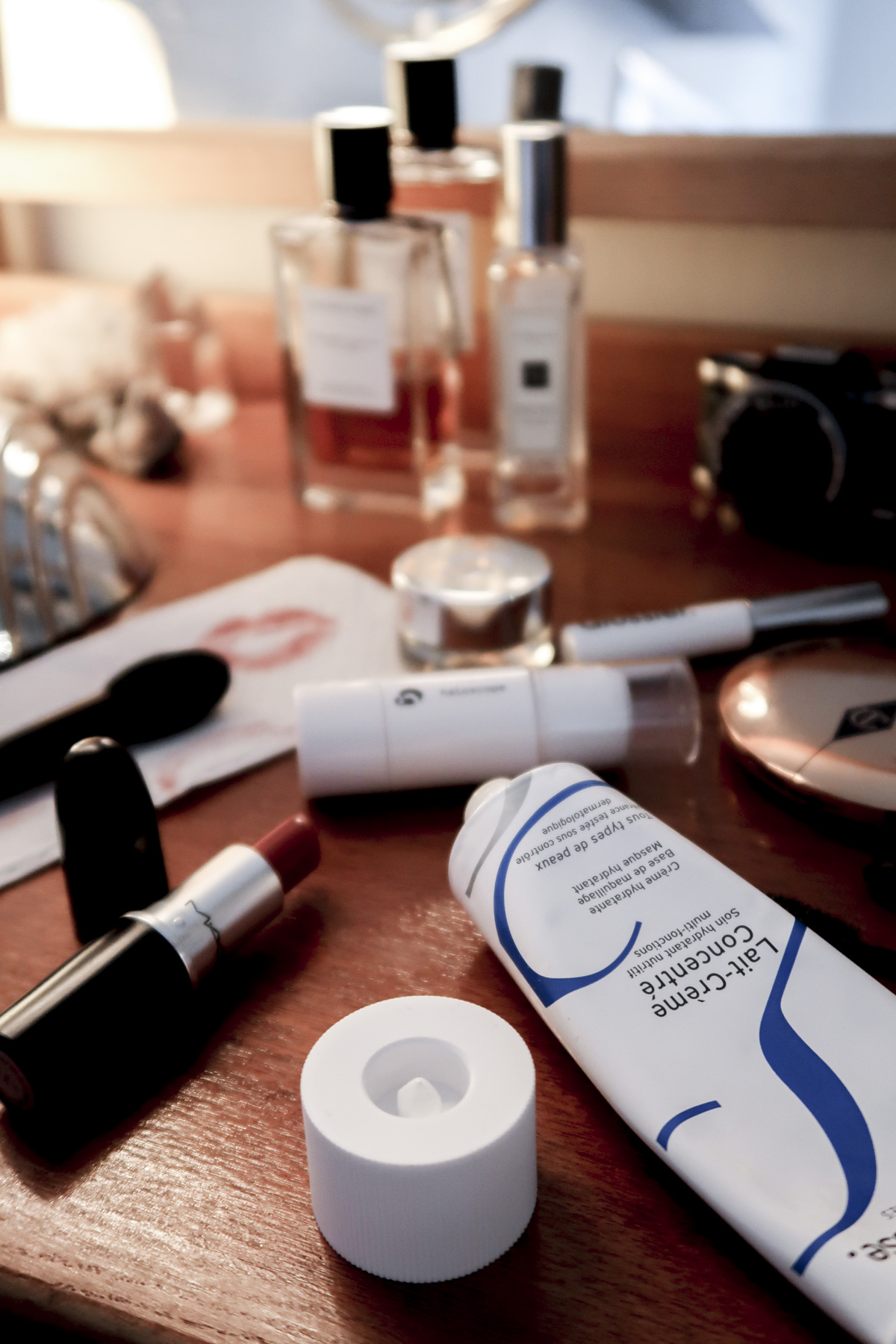 Well you know those times when you plan something out and get everything ready, but simply stop at the last step? This blog post is one of those. I’ve had the photos ready since some time in December and actually known what to write but I’ve simply not taken the time to sit down and write the post. But fortunately, on the makeup side of things – not much has changed since December when it comes to my commuter makeup look. I still do almost exactly the same look (with a slight change of  lipstick shade.)

The priorities with this look is that it needs to be fast and it needs to make me feel good. That’s why I’ve focused on the most important things for me! 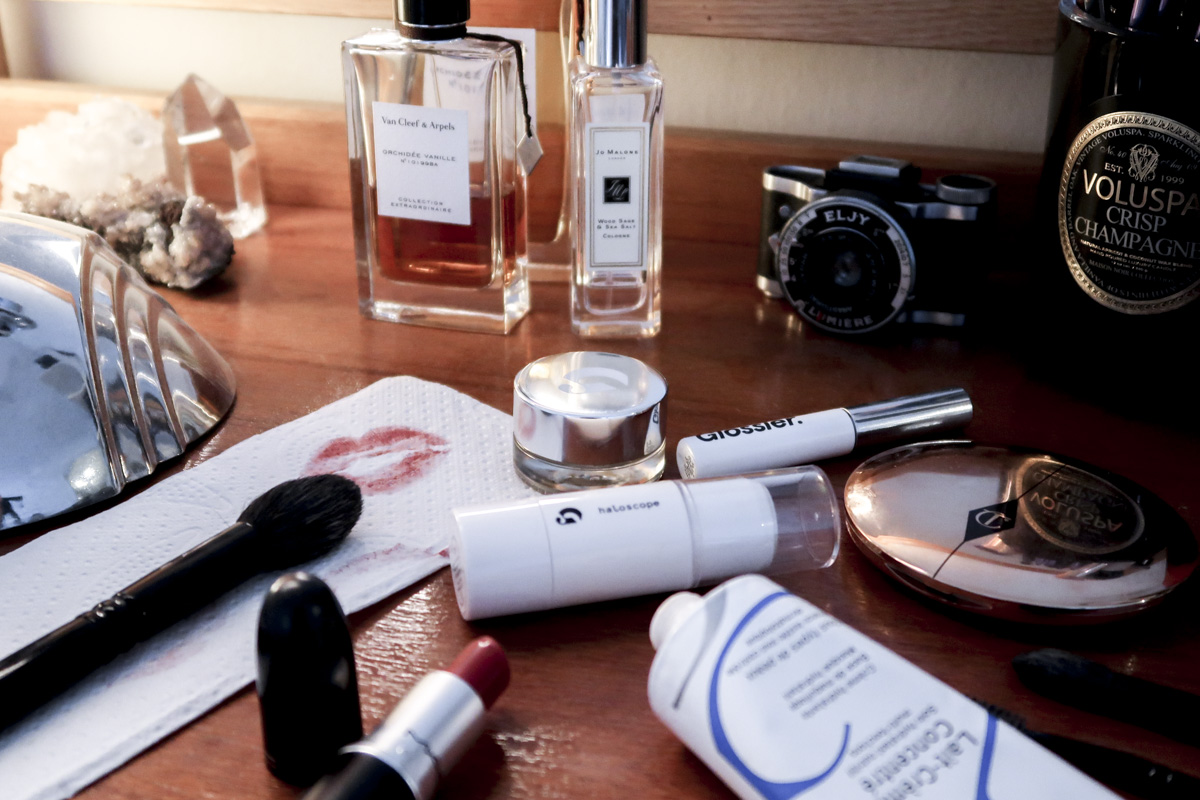 To feel fresh and to make the rest of my makeup look good i take some time to do my skincare. Cleanse with The Organic Pharmacy Carrot Butter Cleanser, add some Vichy Aqualia Thermal Serum and then top it of with a bit of Embryolisse Lait-Crème Concentré. This creates a hydrated base with a lot of glow.

Then to the makeup side of things I’ve kept it quite simple. As you know buy now I’m a sucker for Glossier, and totally love their Stretch Concealer. It looks like skin when you apply it and you can’t see the texture at all! So I take some of that under my eyes and on the reddest parts of my face (My nose, chin, cheeks and a bit on the forhead – so practicly my whole face.)

Then I add some lipstick as a blush (the same shade that I’m using on my lips), a dusting of powder and finish it with Glossier Haloscope in Moonstone.

The eyebrows I’ve kept as they are (it’s not my best feature so I’m embracing this natural look thats trending right now and pretending that they don’t excist!) I usually brush them and sometimes add a bit of Glossier Boy Brow in Clear. But I’m thinking about bying a ABH Brow Wiz in Taupe just to give them a little more shape but we’ll see. 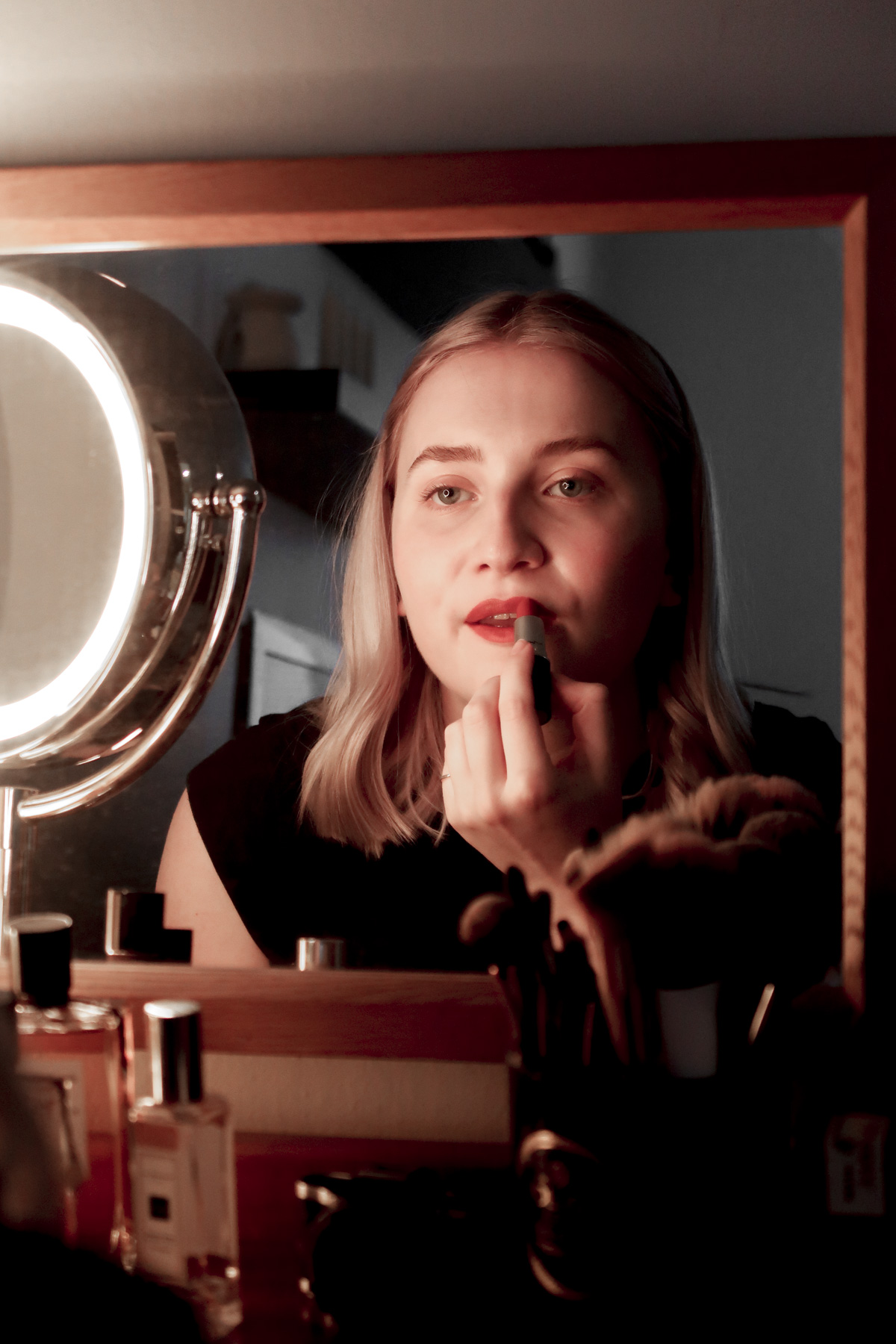 The lashes get the same treatment as the eyebrows but not for exactly the same reason! Firstly, I HATE mascara. It smudges and makes me unable to touch my eyes. I’ve worn mascara since I was 13, but one day I woke up and asked myself, what have mascara really done for me? Fine – it makes my eyes look bigger and more alert, but at the same time it’s the makeup product that is most difficult to get of. It makes me look tired because the residue leaves darkness under my eyes and it’s uncomfortable. That together with the constant rain and snow during the Swedish winter means this is a no-go!

So I simply curl my lashes in the mornings to get some volume and then leave them as they are. Since I’ve stopped using mascara my lashes has become a lot healthier and fuller btw.

This is the part where I put in the most effort, At 05.30 in the morning you need to choose where you want to put you time and I’ve chosen lipstick! It’s my favorite makeup product and the one that makes the biggest difference to your face in the shortest amount of time.

In December I had a thing for Mac Chili because it’s a more moisturizing version of Kat von D Liquid Lipstick in Lolita II. Macs matte formuala is stilla bit drying though (so if you got any Lolita II dupes that are even more hydrating I’m all ears) so now I’ve gone back to my favorite lipstick formula – Charlotte Tilbury Matte Revolution! I’ve altered between the shades Walk of Shame, Glastonberry, Tell Laura and my most recent obsession (since yesterday to be exact) Opium Noir. (And underneath I put a thin layer of Elizabeth Arden Eight Hour Repair Balm to keep everything moisturized. This is Sweden after all…)

So the commuter makeup look in short, I keep my eyebrows and lashes natural, let the skin breath and only put concealer where I want to hide redness and under eye bags – blush to reduce the redness by shifting the contrast – and a bit of glow on the cheeks because glow! Then I put all my time and focus on the lips because it’s fun! And that’s how you get ready in about 7 minutes each morning.